VISIT OF THE RECTOR MAJOR TO ZMB VICE PROVINCE 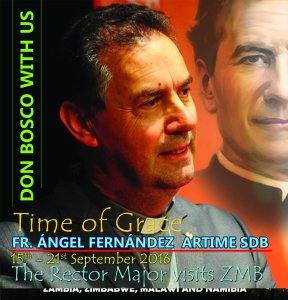 Fr Ángel Fernández Artime, the Rector Major is visiting the Vice-Province of Zambia-Zimbabwe-Malawi-Namibia.

Accompanied by his secretary, Fr Horacio López, the Rector Major landed at midday tomorrow 15 September in Lilongwe, the capital of Malawi. Fr Á.F. Artime remained in the country until the morning of Sunday 18arch-coridor October. He met the Council of the Vice-Province, young people and members of the Salesian Family. On Saturday he presided at the Eucharist during which the parish entrusted to the Salesians will be dedicated to Mary Help of Christians. He received the promises of twenty people who made a formal commitment as Salesian Cooperators.

On the early afternoon of 18.09. 2016 (Sunday) he arrived in Lusaka, capital of Zambia. Fr Á.F. Artime was welcomed by the leaders of the local Salesian Family, youths and volunteers. With the traditional dance he was welcomed and he joined the group dancing. Then, in the afternoon, he blessed the new novitiate building. 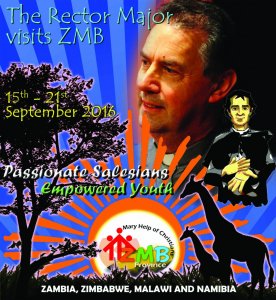 On 19th September 2016, (Monday) he celebrated mass for the Novices and their formation guides. The same evening he visited the “City of Hope” run by the Daughters of Mary Help of Christians. It is a centre for orphans and young people at risk. At City of Hope he met with the young people.