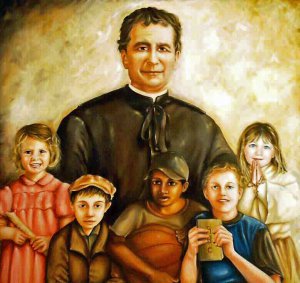 St. John Bosco is the Father and Founder of the Salesian Congregation.

John Bosco was born at Castelnuovo d’Asti on 16 August 185, of a family of peasant farmers. His father, Francis Bosco, died when John was just two, and Margaret Occhiena found herself bringing up Anthony, Joseph and John alone.

With firm kindness and unbounded faith Margaret, wise educator that she was, made her family into a domestic church.

From when he was small, John began to feel a desire to become a priest. he spoke of having had a dream at nine years of age, which revealed to him his mission: “Make yourself humble, strong and robust”, a woman resplendent as the sun told him, “and what you see happening to these wolves which change into lambs, you will do for my children. I will be your teacher. In time you will understand”. While still a lad, John began to do magic tricks, learned with hard effort, for his friends, and he alternated this with work and prayer.

The elderly Fr Calosso started him off with his studies for the priesthood, studies that cost him effort, to the point where he had to leave home because of his brother anthony’s opposition. He wanted John to work in the fields.

As a seminarian at Chieri, he thought up the idea of the ‘Cheerful Society, which gathered boys from around the town. In June 1841 he was ordained priest. His spiritual director, Fr cafasso, advised him to complete his studies at the Ecclesiastical Institute. Meanwhile Don Bosco gathered his first boys around him, and organised a festive oratory, initially on the move but then stabilised at Valdocco. Margaret, by now elderly, accepted to come to Turin and help him, and become ‘Mamma Margaret’ for the boys.

Don Bosco began to give a place to boys without a home to go to. He taught them to work, and to love the Lord; he sang, played and prayed with them. With the first boys came his first helpers. Thus he developed his famous educational method, the Preventive System. “Be with the boys, prevent sin through reason, religion and loving kindness. Become saints and educators of saints. Our boys must know they are loved”.

Over time the first helpers, with the help of Pope Pius IX, became a Congregation aimed at the salvation of the young, fighting all forms of poverty and taking as its own the motto: “Give me souls, take away the rest”.

Young Dominic Savio is the first fruit of the Preventive System. Mary Help of Christians, who always supported Don Bosco in his work, obtained many graces for him, even extraordinary ones, as well as the funds necessary for his enterprises. She helped him build the Basilica which bears her name.

With the help of Saint Mary domenica Mazzarello, he founded the Institute of the Daughters of Mary Help of Christians. With benefactors and committed lay people he gave life to the Salesian Cooperators.

Don Bosco died exhausted from work at age 72, on 31 January 1888. Today the Salesian Family is throughout the world.

Pope John Paul II declared him ‘Father and Teacher of Youth’ on the centenary of his death.