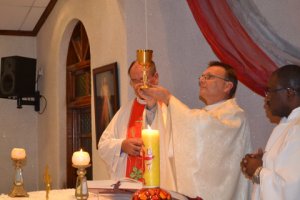 Fr. Christopher Rychcik SDB, the Provincial of ZMB Vice Province Celebrates the SILVER JUBILEE of his
priestly ordination. He came to Zambia as a missionary from Poland. He was ordained a priest on 26, April 1992 in Kazembe, Zambia. Since 2008 he is Novice Master of ZMB Vice-Province. He has been appointed as the fifth Superior of the Vice Province of ZMB. His Silver Jubilee of the priestly ordination is celebrated today in the Provincial House at Chawama, Lusaka, Zambia. The Salesian Priests, Brothers, Novices, Salesian Sisters and the Cooperators joined the Eucharistic Celebration and Fr. Aksamit Leszek SDB, the Vice Provincial preached during Mass. His Zeal for doing God’s work has to be noted. We wish him lot of blessings in his new responsibility of animating the ZMB province as the provincial. 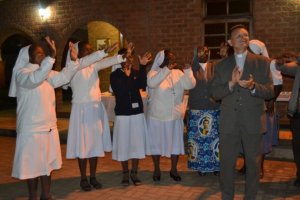