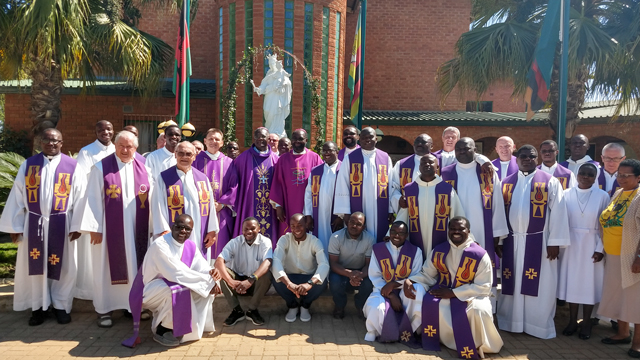 Lusaka (ZAMBIA) 02-05/04/2019. On Friday 5, April 2019, the Salesians of Don Bosco in ZMB have concluded the IX Provincial Chapter of ZMB. It has been a joyful moment of reflection and discernment for all the confreres. The participation was remarkable and the various moments were marked by deep prayer, a desire to discern the will of God for ZMB today and also good moments of fraternal sharing. Right Rev. Bishop Clement Mulenga SDB, participated as an observer, together with Sr. Chanda Nsofwa, Sr. Godelive Kayobera and Mrs. Ireene Sikazwe, the provincial coordinator of the Salesian Cooperators of ZMB.
The IX Provincial Chapter began on Tuesday 2, April 2019. The Archbishop of Lusaka, Right Rev. Doctor Alick Banda graced the provincial event with this presence and he presided over the opening mass. He was very affectionate towards the sons of Don Bosco and he also challenged them to give a deep thought to the issue of the street kids of Lusaka.
The meeting was solemnly opened at 9hrs of Tuesday with the invocation of the Holy Spirit and the lighting up of a candle. The moderator of the Chapter, Fr Oswald Mulenga SDB, did a splendid job in harmonizing all the efforts in the meeting. He chaired the meeting and gracefully made the programme flow during the four days of the Chapter.

Chapter Members posing for a group photo after the opening mass

On the First Day, the Provincial of ZMB read his report on the Status of the Vice-Province, and so did the Provincial Economer, Brother Walter Thyrniang SDB. The confreres were very attentive to all the details and they were very active in their interventions. It was a good atmosphere all in all. Before the presentation of the reports, a group of young people presented a topic on the Today’s Youth Situation. They made a very powerful reflection and their presentation contributed to give a framework to the rest of the reflections.

In the afternoon of the first day, the Chapter began the group work on the various units of the Instrumentum Laboris. The document was divided up according to the various topics. The groups spent a good deal of time reflecting on the findings coming from the communities. On the second and third days the Chapter had the full session to share the group works and approve the editing made to the document. It was a very taxing work but the chapter members pulled up their socks and made a good use of the time. In the evenings, there were moments of relaxation and interaction. There was a very fraternal atmosphere.

On the third day, the chapter dwelt on the various articles of the Provincial Directory. The Moderator had divided them up for each of the groups to make modifications and amendments.