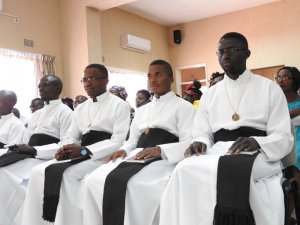 Eight Novices made their first profession on 15th August in Lusaka after completing one year of Novitiate formation. During a concelebrated Eucharistic celebration, seven pronounced their temporary vows as Salesians and were received as candidate for priesthood and one as Salesian Coadjutor Brother.

Fr. Christopher Rychcik the Provincial was the main celebrant joined by Salesians priests. The Provincial received the vows during the mass attended by many religious and relatives of the newly professed and many people who came to witness and prayed for the young Salesians on the feast of the Assumption of Mary at the Novitiate community.

While the new Salesians shall be travelling to Moshi, Tanzania tonight to continue their formation and studies in Philosophy and Education, the Novitiate community has commenced with a new group of twenty five (25) new Novices from Zambia, Malawi, Zimbabwe, Namibia, the Democratic Republic of Congo and South Africa.Eig