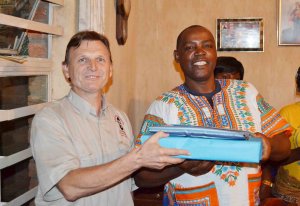 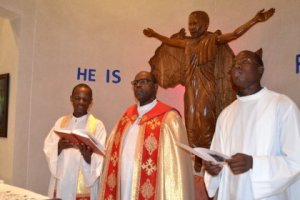 The Extra-ordinary Visitation in the vice-province of ZMB reached its fruition on 28th March 2016. Fr. Americo Chaquisse Raul sdb, the regional for Africa-Madagascar met the Provincial and his council at the end of his extra-ordinary visitation. The Vespers was solemnly prayed and that marked the conclusion of his visitation. After that, Fr. George Chalissery, the provincial gave a sincere word of thanks for his pain-staking visitation. Fr. Americo gave his concluding remarks in way of giving good night. He gave a lot appreciation for the salesians who are contributing a lot in the province. He said that what he witnessed in the province is quite different that he heard from others about the province. Personal experience is more laudable than coming with prejudice. After this, we had agape. The Salesian novices, Salesian sisters and Salesian Cooperators were also present. On the same day, the newly constructed PDO office was solemnly blessed and inaugurated by Fr. Americo.