MEETING WITH THE RECTOR MAJOR 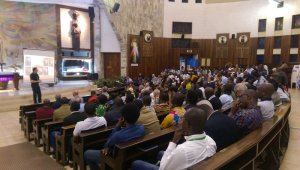 Nairobi (Zambia) 19-23/02/2018. CIVAM MEETING WITH THE RECTOR MAJOR. Over one hundred Salesians from all the Provinces and Vice-Provinces of Africa and Madagascar met with Don Angel Fernandez Artime SDB, Rector Major of the Salesians of Don Bosco. Fr Angel arrived from Rome together with the councillors of Youth Ministry, Formation and Social Communication. The meeting aimed at evaluating the Salesian Mission in the Region for the period 2012-2018.

The meeting was held at the premises of Dimesse Sisters in Nairobi-Kenya. The various interventions were made in English, Italian and French. The facilitators enjoyed the privileged of simultaneous translations to Italian, English and French. After each intervention, the assembly broke up in groups for the group discussion before returning to the plenary.

Some of the main points discussed were:

The meeting ended on Friday 23 with the celebration of the Vespers and the final blessing from the Rector Major.